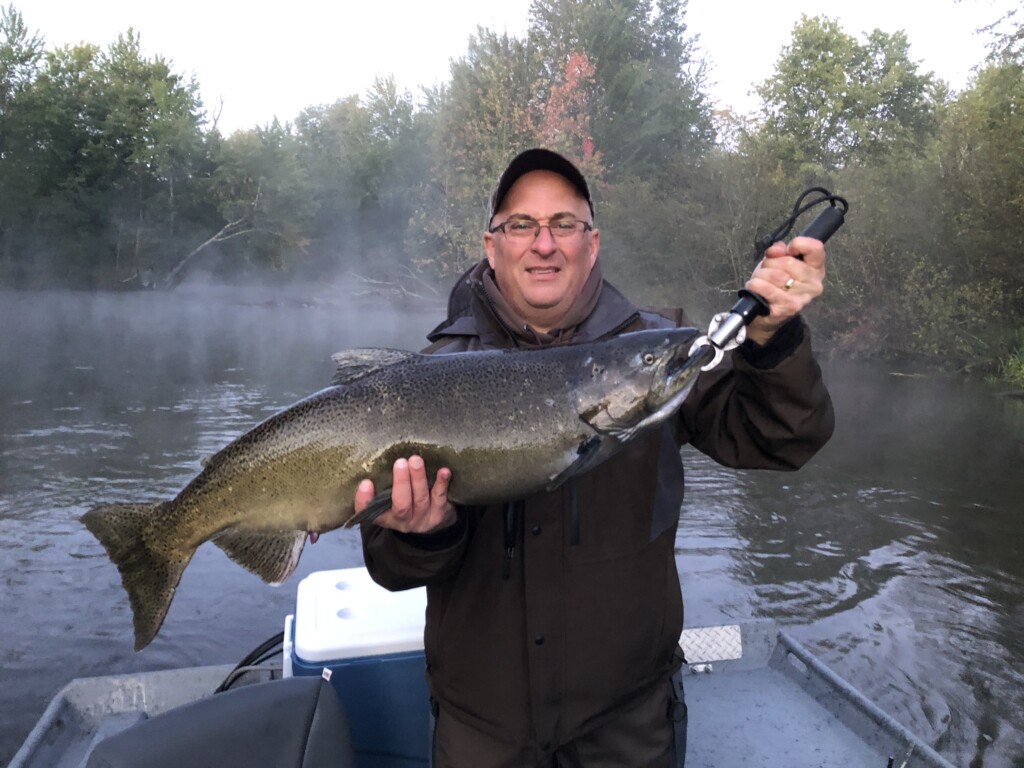 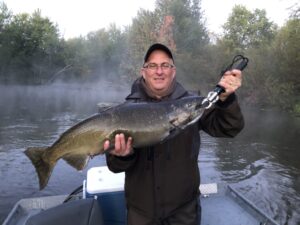 John with a NICE Pere Marquette river salmon that he got recently on an outing with his brother Jim from KY.

The Muskegon fishing report for September 27, 2020 in the Newaygo, Michigan area is about river still wanting to hold onto summer like conditions !  Due to lack of rain and some rather nice late September weather, that’s exactly what is happening.

With very little rain over the last near month now, levels are “dog days of summer” low and the water is gin clear….actually, more clear than that even !  Much anticipated rain is forecasted for the early part of this coming week.  Click HERE for current and forecasted weather for the Newaygo, Michigan area.

Any luck will find the rivers of Michigan getting a re-fill of water with several days of weather coming through that could equate to precipitation in the upper watershed of the Muskegon.  Present levels are LOW, like….watch out where you try to run a boat low !  Click HERE for current Muskegon river water flow data.

With the Muskegon river still several days away from finding good numbers of staging fish in certain pools and runs, much of my attention up to this point has been on the guided trips I’ve been doing on the Pere Marquette and Manistee rivers.  With both fly fishing and spin tackle, and out of either jet boat or drift boat, I’ve fished several different sections of the Pere Marquette river as well as the Manistee river out of the Tippy Dam Recreation Area.

Early stages of the Chinook salmon run are showing us lower numbers overall, but “most” of what we’ve had to gauge that on, had been what we’ve seen come into the Pere Marquette, as other rivers such as the Manistee, Platte, Grand and Muskegon, had not really gotten going.  Now that we have fish in and more on the way into the Manistee, we’ll be able to get a better idea of what fall holds for salmon 2020.

I will be starting trips on the Muskegon around October 10 and focus on salmon through much of October, before switching to fall steelhead for the remainder of the fall and early winter season, which on the Muskegon river goes up to and most years through, the holidays and the New Year.

If you’re looking for a current report for some possible walk in fishing on the Rogue, White or Pere Marquette rivers, feel free to touch base as well.

Happy Fishing to all !