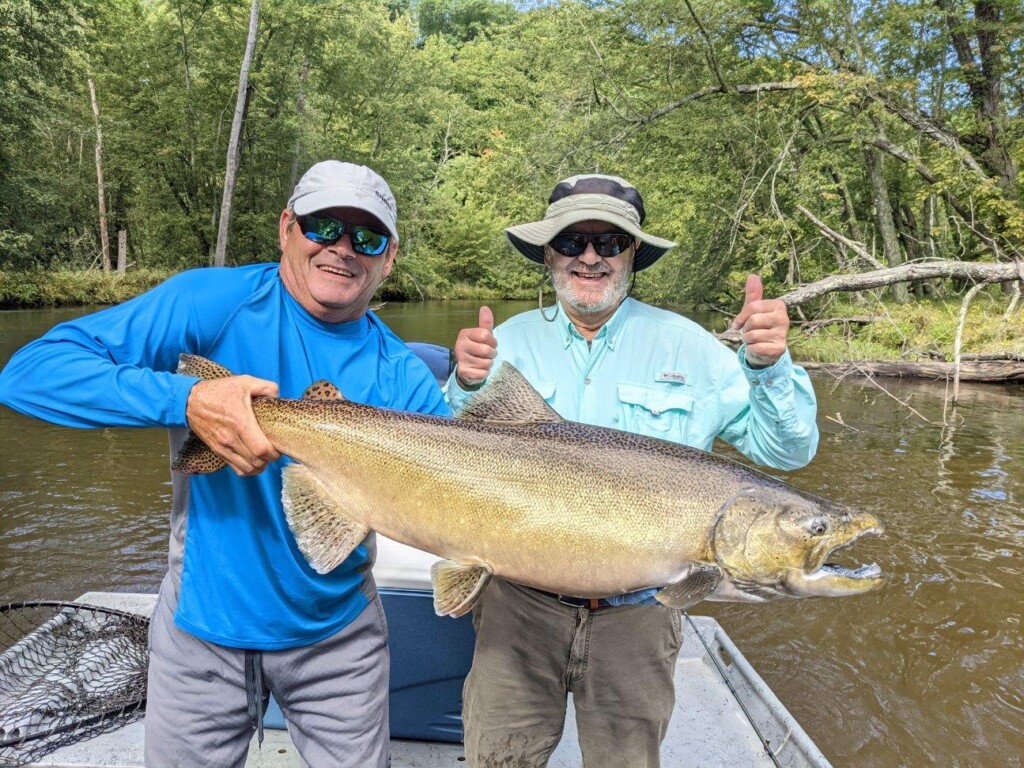 Both Coho and Chinook salmon have a preference for cold water with a high oxygen content, making the Great Lakes an ideal habitat.  These very strong and voracious eaters were a perfect solution to the decline of sport fishing in the Great Lakes in the 1960’s.

There are two salmon that are a fairly new addition to the great lakes, the Coho being the first and the Chinook shortly after.  The Coho were introduced in 1966, with the first stockings were done in the Platte river and Bear creek, both tributaries to lake Michigan.  After seeing the success of Coho, Chinook were then introduced and saw similar success in adapting to the Great Lakes.

Chinook and Coho live in Great Lakes in schools, traveling throughout the year together in search of food.   Come spring, fish in the southern portions of the lakes will become active first, as this is where the baitfish activity picks up early in the spring.  As temperatures warm, these schooling fish will often migrate north, as this is the path of their food source, mostly alewifes.

Chinook and coho spawn in streams over beds of large gravel, near riffles. Within two weeks after spawning, adult chinook and coho die.  The following early spring the eggs hatch, and the young can remain in the river for up to one year before they migrate down to the lake, but most make that migration at the end of the summer or early fall.

Both salmon will remain in lake Michigan until their 4th year, at with point they begin their migration up their natal river to spawn and then die.  Adult Chinook can grow to 30 pounds or more, Coho will peak around 20 pounds.

Young salmon in rivers eat insects, insect larvae and crustaceans such as scuds, sow bugs and young crayfish.  Adults in the lakes eat fish almost exclusively, with smelt and alewives being their primary food in the Great Lakes.

Anglers prize chinook partly because of their large size and the challenge they present for fishing, and partly because they make a delicious meal.   Unlike the color of salmon meat found in stores, the Great Lakes Chinook is more peach in color, with the Coho having slightly more noticeable pink hue to its meat.

In hindsight, bringing in both salmon has been a blessing to all who benefit from their healthy population in the Great Lakes.  Many benefit from this, including hotels who lodge traveling anglers, to restaurants, grocery stores, gas stations, marina’s, charter fishing businesses and Michigan fishing license sales, just to name a few.

A great addition to the Great Lakes, we hope this mutually beneficial relationship continues for decades to come.