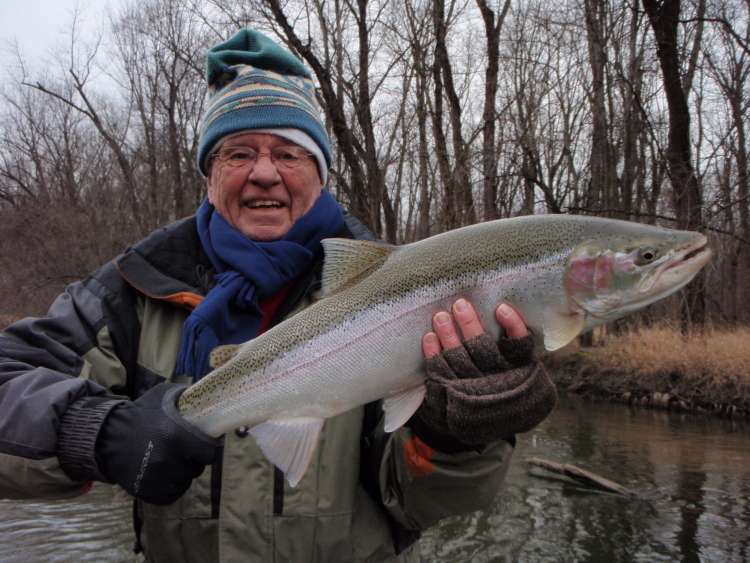 Near the town of Newaygo, Michigan and less than an hour drive north of Grand Rapids is the Muskegon River, one of the best tailwater fisheries in the midwest.   Several different species of both coldwater and warmwater fish call the Muskegon home on a year round basis or part time in the spring, summer and fall.  From migratory big game fish such as salmon and steelhead that come out of lake Michigan and into the river each year, to resident trout, as well as summer smallmouth bass….it’s a fish rich river system on a year round basis.

About the Muskegon River

The Muskegon River finds its source in the Houghton Lake area, in north central portion of Michigan’s lower peninsula.  It winds its way over 200 miles to empty into Muskegon Lake, which is connected to lake Michigan by a long channel. This river is a big tailwater and is most affectively fished from a drift boat or jet sled. When stealth and easy movement are a necessity, drift boats are your best bet. A jet sled, though, can get you to and from certain “hot spots” quickly and safely, while also giving you more time to fly fish.  That being said, it has several good areas for walk in anglers who want to wade fish the river.  A fair amount of public land is in the first 6+ miles of river, below Croton hydroelectric dam, just east of Newaygo.

The Muskegon river is rich with different species of fish. The most popular to the fly fisher are resident Rainbow and Brown trout, which are fished using several fly fishing techniques, such as streamer fishing with sinking or sink tip lines, indicator nymph fishing, as well as dry fly fishing during hatches such as tan Caddis, Sulphurs, BWO’s, Gray Drakes and Isonychia’s.

Several great lakes big game fish migrate up the Muskegon river to spawn each year as well.   The first to arrive after the new year are spring steelhead, which begin their migration in March and continue to come up to mid May.  Chinook salmon are the next to show up in the fall, with the first of the salmon coming in September, they will run through October and into early November.  Right on the tails of the salmon are fall run steelhead, which are quite possibly the fastest and most acrobatic fresh water fish on the planet.  The steelhead enter the river in the fall to eat, not spawn.  They feed on the both insects that are kicked up by spawning salmon, as well as salmon eggs, which provide them with the highest protein food available.   Come November, we’ll see lake run Brown trout arrive and they spawn in late fall.  Another fish that’s growing in popularity for river anglers is Smallmouth bass.  These are willing biters, scrappy fighters and are taken on both topwater “poppers”, as well as subsurface imitations of crayfish and baitfish.  The Muskegon river gets a BIG migratory run of walleye out of Muskegon lake, however this takes place most of the time when the season is closed for them, so they are overlooked for the most part.  Resident walleye are present in the river as well, but not in great numbers and due to their nocturnal nature, are often overlooked since the best fishing for them would be from dusk, into the dark of night.

Croton Dam is a Consumers Energy power plant complex on the Muskegon river in Croton, MI where the tailwater begins.   The river flows over gravel bars, through fast runs and deep pools for nearly 20 miles of quality habitat, providing outstanding fish for both cold and warm water species of fish throughout the year.

From the dam down to the Thornapple Avenue launch site is some of the best spawning gravel to be found for migratory runs of fall salmon and spring steelhead.  Access to the river can be had at the Pine st. boat launch, off of 72nd st. off of Pine st. and 72nd st., off of Thornapple rd. and the boat launch itself off Thornapple rd.  72nd st. is a road that’s cut off by the river, but exists on both sides of the river, therefore the reference to it in multiple locations.  A decent atlas map of Michigan will provide more detailed information.

The stretch from Thornapple to Newaygo also has quality spawning grounds as well, is monster trout water due to the difference in regulation and contains great runs and slow moving pools for winter steelhead fishing.  With limited public land in this 6+ miles stretch, it’s most often fished from some sort of vessel, from standard boat, to canoe, kayak,  biyak and even inner tube !

(March-May) At some point in the month of March most every year, water levels and temperatures begin to rise, which brings fresh steelhead into the river out of lake Michigan on their annual spawning run.  This “Crown Jewel” of Great Lakes Big Game fish can be fished to throughout the entire spring season, as the Muskegon river has arguably the longest spring steelhead season of any river in the Midwest.

Spring also brings the first new insect hatches of the season, starting with small Midges, but including much larger black Stone flies as some point during the spring.   When river conditions are right, big, hungry trout eagerly sip, chase and slash at the Stone flies as they flutter across the river surface.  Other hatches that follow include Caddis, BWO’s and early Sulphurs.  Streamer fishing in the spring provides an opportunity for not only trophy trout, but also “drop back” steelhead, who have completed their spawn and are heading back to lake Michigan.

This is the time of year when many of the largest Brown and Rainbow trout are caught while feeding behind spawning steelhead.  We have some true Trophy Trout in the Muskegon river, they’re quite the challenge to catch, but spring is considered by some to be the best time to tangle with a monster Rainbow or Brown trout.

(June-August) June brings more insect hatches on the Muskegon river and it’s by far the best month for the fly fisher in search of dry fly fishing.  Caddis, Sulphur, Gray Drake, Brown Drake, Isonychia and BWO hatches all occur in June, with the Gray Drakes getting the most attention, as they come out at dusk, are fished right up to dark and that when the BIG FISH come out to feed ! Once water temperatures of late July and early August rise, hatches taper off and it’s terrestrial time for trout and streamer time for Smallmouth Bass.

Smallmouth bass provide great action for mid to late summer fishing and are caught on both topwater “poppers”, as well as other flies or lures that create a “wake”, as well as subsurface imitations of Crayfish and baitfish, along with other general attractor fly patterns or lures.

At some point during the summer months, we’ll fish different stretches of the Muskegon river, from near the Big Rapids area, all the way down through the 3 reservoirs to Newaygo or even closer to Muskegon itself.  With several stretches to choose from, we fish different areas based on water conditions and fish activity.  We’ll also have opportunities for fishing to Northern Pike in some of them and even the wary Walleye on other stretches.

(September-November) September is a great time to be on a big river with the onset of changing colors of the tress. Trophy pacific Chinook salmon enter the Muskegon in September and are targeted heavily from late September – early November.   These BEASTS of the BIG LAKE can put the best angers skills to the test and push the boundaries of equipment, as such salmon can exceed 25# and come with a bad attitude !

Fall steelhead come in once salmon begin to spawn and are fished from late October through the end of December, even into the New Year when weather allows.  Fall steelhead in Michigan are one of the fastest fresh water fish you will find anywhere on the planet.  Having some into the river in search the food they smell coming out of the river mouth, they’re all juiced up on the protein from the salmon eggs and have endless energy.  A battle that includes several blistering runs, coupled with a handful+ of jumps where the fish clears the water by 5+’, at a high rate of speed, are common when tussling with a fall steelhead.

Trout fishing for resident Rainbow and Brown trout can be very good as well in the fall.   Indicator fishing, or presenting a nymph and/or egg imitation in a similar way behind spawning salmon, will produce some great trout.  The resident trout are packing in as much food as they can, in anticipation of the colder months ahead, when their metabolism slows considerably.

(December-February) Winter in general is a very tranquil time on the Muskegon river. Bald eagles soar overhead, mink scamper along the bank, muskrats swim a chaw full of grasses to their dens and flocks of feeding turkey barely acknowledge our presence, intent on scouring for morsels on the rivers edge.

December still finds the river with a good population of migratory steelhead around.  Some of these fish will “winter over” in the river, others come in throughout the fall season, feed at their leisure and go back to lake Michigan at some point before very cold weather arrives.  Resident Rainbow and Brown trout are still eager to eat before water temperatures drop into the 30’s, so early winter is still a good time for quality trout fishing.

Early winter is also a great time to swing big, articulated streamers on both single handed rods and 2 handed rods used while Spey casting for resident trout, steelhead and lake run brown trout.  Although it takes a specific level of patience to swing streamers, “the bite” is unlike no other…..hold onto your rod !