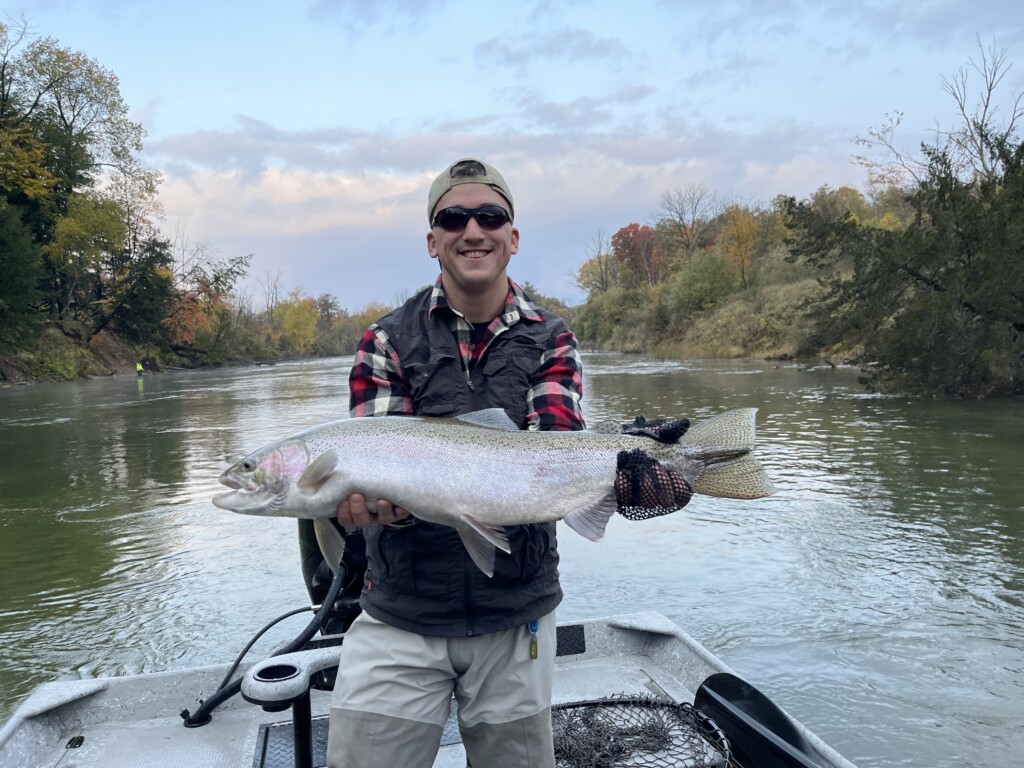 I hope your fall season is going well and for those in the Midwest, you’ve had an opportunity to get out and take in the booming fall colors !  There are some stands of trees on the various rivers I’ve been on lately that are just stunning !

From the early season on the Pere Marquette river down by Ludington, to upper “PM” trips close to Baldwin, more recently Manistee river trips out of Wellston and now onto the Muskegon river in Newaygo, the fall season has been good and with a LOT of fish.

The Chinook salmon run was good on the PM, as well as the Manistee and by all indications, we should have a good one on the Muskegon, but it has yet to reach its prime.  The PM and Manistee runs fall in the top 3-4 that I’ve seen over my 26 year guiding career….good news for 2026 !

More interesting has been the arrival of fall steelhead in the Muskegon a bit earlier than normal…there are some studs in there now and the pictures below show one of them, along with a great resident Brown trout caught yesterday and a brute of a chinook from September on the lower PM.  Much of this can be tied to river conditions, such as temperatures and levels, which improved a lot over the last week+.  Click HERE for current Muskegon river water flow data.

Mother nature has tested our rain gear in recent weeks, but we needed those rains and could use another shot for the Muskegon river, which appears to be coming early next week.  Click HERE for current and forecasted weather for the Newaygo, Michigan area.

The river traffic/pressure was really high on the PM early to mid September, but tapered off a little as more salmon came into other rivers.   The Manistee river traffic was opposite, with not nearly the crowds seen in years past.   We’ll see how things pan out on the Muskegon, I’ve only been “back home” for a couple days.

I’ve had some changes to my schedule for next week, November and early December, which just transpired for a few reasons, health being primary one for 3 guests who had 8 dates booked between them….hope they can make it back in 2023 !

Here are open dates if any are pondering a guided trip yet this fall/early winter, up to December 16.

Have a good rest of your weekend !