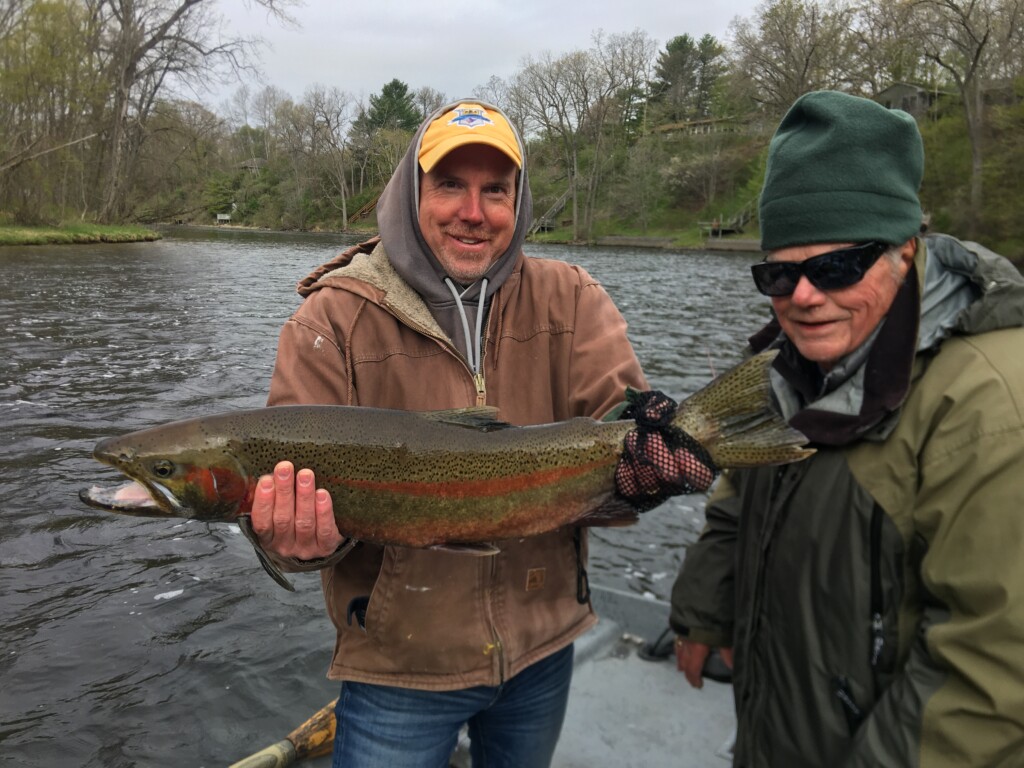 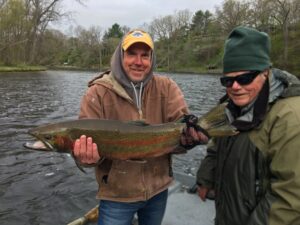 The Muskegon river trout fishing report for May 12, 2021 in the Newaygo, Michigan area touches on several things for this time of spring.  First, the rapidly winding down spring steelhead run is in the home stretch, the massive “sucker spawn” is about to begin and the onset of our best insect hatches and dry fly fishing of the year will follow in the weeks ahead.

We’re still dealing with low and gin clear water, so this late spring and early summers approach to trout fishing, will involve the use of lighter tippet, possibly slightly downsized flies and an overall “stealthy” approach to fishing.  Even with the rains we got last weekend, river levels remain low, click HERE for current Muskegon river water flow data.

With very little in the line of precipitation being forecasted over the next near 2 weeks, we will likely have such conditions through much of the prime trout time, which historically goes from mid-late May – late June or early July, depending on river temperatures staying in the low to mid 60’s up to that point.  Click HERE for current and forecasted weather for the Newaygo, Michigan area.

Our insect hatch schedule for the Muskegon river in and around the Newaygo area will see Cinnamon Caddis being the first good hatch, followed by Sulphurs, then Gray Drakes, maybe some Brown Drakes in there as well and lastly Isonychia’s.  On any given cloudy day through June and into early July, we’ll have BWO’s coming off as well.

The trout fishing is done with fly fishing equipment, where we’ll utilize not only floating lines for dry fly fishing, but also sinking or sink tip lines for fishing streamers sub surface.  Come later in the summer, I will use both fly fishing and spin tackle equipment, it’s a matter of personal preference and what works best for the fish we’re pursuing.

Once the primary hatches come to an end, Smallmouth Bass, Northern Pike and Walleye will be the fish to pursue on the Muskegon river and not just below Croton dam and through the Newaygo area.  When river conditions are right, I will fish the impoundments above Croton, Hardy and Rogers dams, which cover about 30 river miles.    Depending on how our weather patterns of June go, the Grand river can fish VERY good both around the Grand Rapids area, as well as east towards Ionia and west towards Grand Haven itself.

Lastly, I’ve already gotten many calls, emails and text messages about the next great lakes big game fish season, which will be early run Chinook salmon on the Pere Marquette river close to Ludington.  My 2+ week schedule for that in early September, is about 3/4 full as of now.  If any are considering fall salmon on the Pere Marquette or Manistee, salmon on the Muskegon in October or fall steelhead on the Muskegon late October – mid/late December, best to touch base before July arrives, as most of my September – December fall schedule will be full by then.

Should any be looking to get out for some walk in-wade fishing on any of our west Michigan river, feel free to call for a current report – 616-560-3195.

Thanks and good fishing !