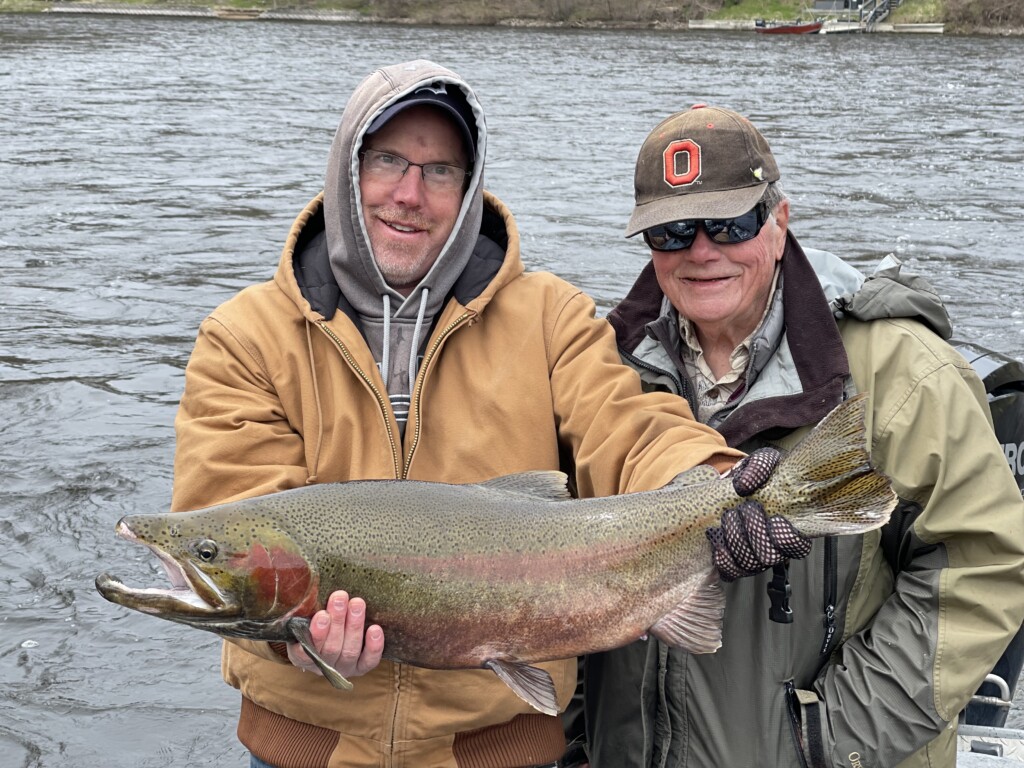 The Muskegon river is still seeing more fresh steelhead come in from lake Michigan on their annual spawning run.   I anticipate the last of them to be coming in this week and they could stick around for a week+.

It has been a little better spring steelhead run this year than we feared coming into 2022.  With a rather poor fall of 2021 steelhead run, many were fearful that we would see the same, but we didn’t.  The biggest difference between the fall and spring runs are that the fall steelhead can come in or choose to stay out in lake Michigan.  The spring run fish, at least the mature adults, have to come in to spawn.

Our overall spring conditions have been good for the rivers of Michigan, with more than enough rain, cooler temperatures and as a result, river levels and temperatures were MUCH better this spring. Click HERE for current Muskegon river water flow data.

With both fly fishing and conventional equipment, we’re still getting into “chrome” on a daily basis and hope to pick up where I left off yesterday, once back on the river in the morning.

Not far off will be warming river temps, insect hatches and the onset of our prime dry fly fishing for resident Brown and Rainbow trout from latter May – late June.   Hoping for some streamer conducive conditions as well, but we’ll see what Mother Nature gives us over the next couple weeks.  Click HERE for current and forecasted weather for the Newaygo, Michigan area.

Once we get into the summer season, it will be a mix of Muskegon river and Grand river Smallmouth Bass and Northern Pike, along with some Pere Marquette river trout fishing through mid to late July, depending on river conditions.

The jump from trout to smally’s/pike is dictated by river conditions and I’ll know more as we see a few more weeks pass.  With such an odd and drought spring of 2021, many of us have fingers crossed for better weather and related conditions.

Should any be looking to get out in the fall for either salmon or steelhead, it would be best to touch base sooner than later….my September is already full, October not far behind and prime steelhead dates in November and early December will go fast !!