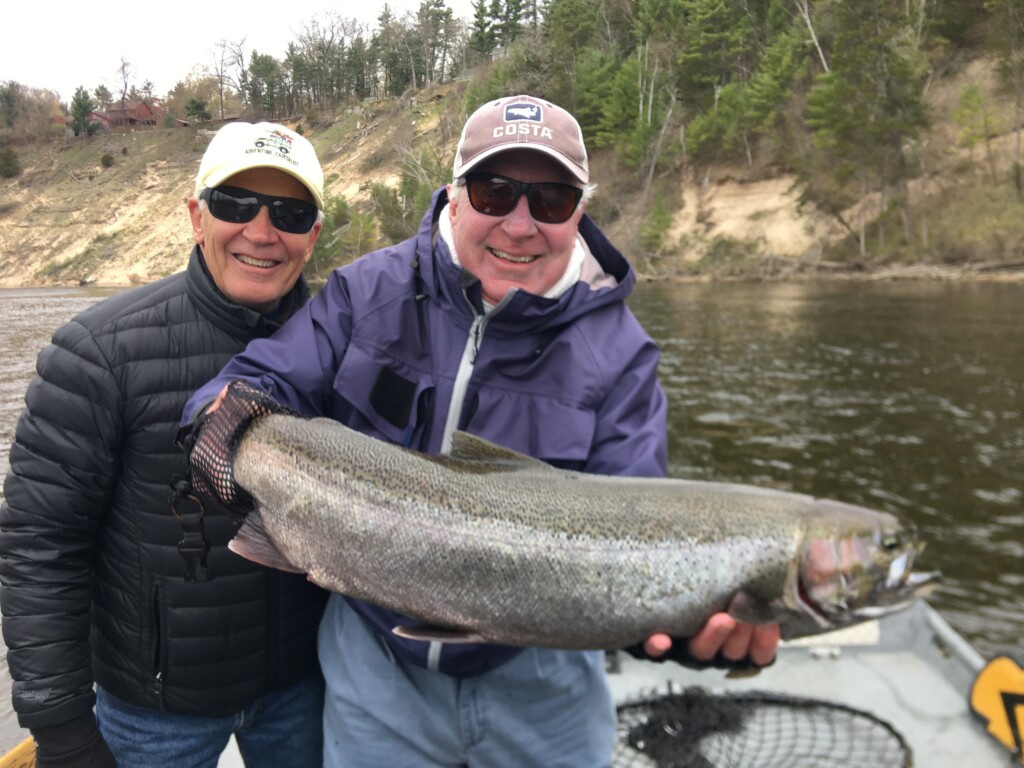 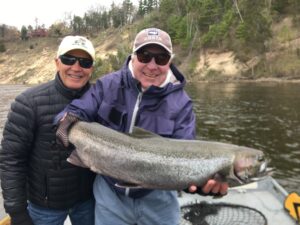 Jack with a great Muskegon river steelhead that he caught while fishing with long time friend Alan, both from the Grand Rapids, MI area. A LOT of fun with these 2 over the years, I hope for many more !

The Muskegon river fishing report for May 8, 2021 in the Newaygo, Michigan area focuses on the tail end of the spring steelhead run, the onset of prime trout dry fly fishing in the weeks ahead and summer fishing options through the months of May, June and July.

We are coming to the end of the 2021 spring steelhead run, much of it occurring amidst record low river levels and overall, a “fair” steelhead run for this year.  We did see and catch some really nice fish, some tipping the scale over 15#, but the number of steelhead in this years spring spawning run was a bit lower than years past.  There are still some steelhead in the system and we will likely see some late season stragglers trickle in up to near June, which is normal for the Muskegon river.   The extremely low river made boat navigation a bit nerve racking at times, but river levels have since started  to come up slowly, click HERE for current Muskegon river water flow data.

We can attribute much of the extremely low river levels to next to no measurable precipitation over the last 3 months, which is very odd for Michigan in spring time.   It’s common to have at least one big storm come through the end of March or early April, then another smaller one or two come late April and early May.  We got neither this year and with very little snow pack to melt off in early to mid March, we simply started off way “behind the 8 ball”, so to speak.  With very little in the line of rain forecasted over the next week+, we may get closer to June before we see any decent rains here in west Michigan.  Click HERE for current and forecasted weather for the Newaygo, Michigan area and west Michigan in general.

Next up will be the beginning of our prime dry fly fishing time, which should kick off within the next couple weeks.  River temperatures really set up the “hatch schedule” for our bugs, starting with caddis, then a mix of sulphurs and gray drakes, along with blue wing olives and isonychia’s to follow.  Once the bugs get doing, we’ll see a fairly predictable emergence of bugs over the course of about a month.

Not too far past the trout dry fly time, will be the beginning of smallmouth bass, pike and walleye fishing.  I do these trips with either fly fishing or light spin tackle equipment and may venture to other rivers come mid summer, based on which are fishing best.   These would include a number of stretches of the Grand river from Ionia area, west to Grand Rapids and even closer to Grand Haven.  The Muskegon river above both Hardy and Rogers dams can fish good as well, when river conditions are right.

Lastly, some peoples thoughts are already shifting to tall and the great lakes big game fish shots at Chinook and Coho salmon, as well as fall steelhead and lake run Brown trout.  I am filling my early run salmon schedule for the Pere Marquette river now and it may very well be full by the end of June or early July.

If any are considering getting out on their own for a few hours of walk in-wade fishing, feel free to call and I’ll provide the best report possible for the time of spring/early summer and the river you’re looking to fish – 616-560-3195 is and has been the same cell phone number I’ve had for years.

Good fishing and hope to see you soon !