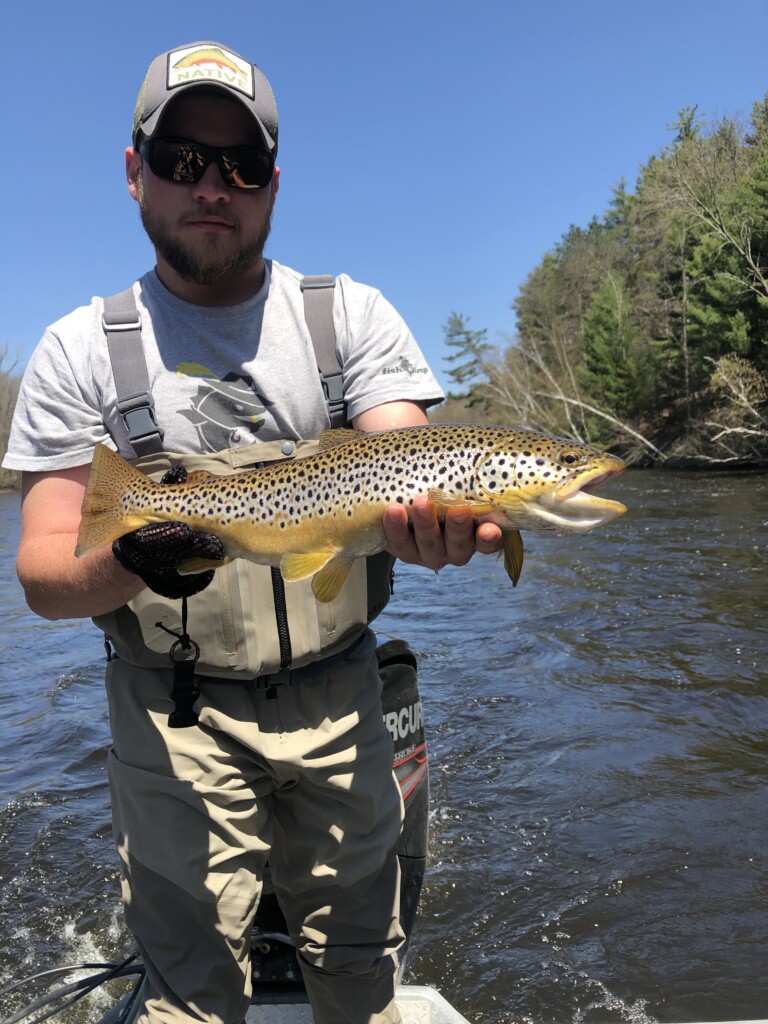 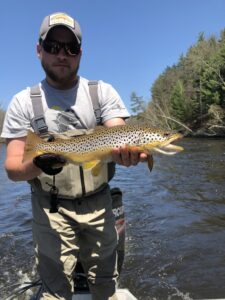 After MANY weeks of pretty crazy “spring” weather here in west Michigan, it appears as though we’re finally going to see more typical conditions, which will finally allow the Muskegon river to settle down after a tumultuous spring.  After 4 rounds of significant rains over the last 60 days, where we saw river levels exceed flows of 5,000 cfs, the river is dropping and should stabilize in the days ahead.  For comparison, “average” flows over the same 60 day time frame referenced, is closer to 3,000 cfs, so we had a lot of water coming through the river system and for a long time.  Click HERE for current Muskegon river water flow data.

This shift in conditions happens to coincide with the end of our spring steelhead run on the Muskegon river and now we’re onto trout fishing, with some of the best dry fly fishing of the year in front of us.

Armed with 4-6 weight fly rods, 9-12′ long tapered leaders ending in 4 or 5 x and an array of emerger and dry fly patterns, this is THE time of early summer for the fly fishing enthusiasts to get their fill or “heads” to cast to……translated = “rising fish” !  The hatch schedule varies with the different flies, with some starting mid day and going to early evening, others starting early evening and going up to dark.

The best fishing right now though is with wet flies, fished just below the surface, on “the swing”.  With long leaders and either very light sink tips or small split shot weight put above the correct wet fly pattern, trout are eager to chase these insect imitations down.

With river conditions in general being behind schedule, we would normally look to fish behind spawning sucker fish right now, but they’re just now getting close to spawning grounds, so it will be another handful of days before this will be a viable approach to catching resident Brown and Rainbow trout on the Muskegon river.

We do have some more rains coming through most of Michigan over the weekend, which shouldn’t do much to river conditions, but may affect ones ability or desire to get out in the days ahead.  Click HERE for current and forecasted weather.

Before we know it, another month will have passed and we’ll be into some great mid summer fishing, as we shift from trout to Smallmouth Bass and Northern Pike.  These outings can be done using fly fishing or conventional equipment and on several stretches of the Muskegon river, from the Stanwood area south of Big Rapids, downstream to the Bridgeton or Maple Island access sites.  Not to be left out of the discussion for summer fishing is the Grand river, in and around the Grand Rapids area.  When the Grand is in good shape, it can fish very well….!

We have some resident Brown and Rainbow trout to catch first on the Muskegon river, in the Newaygo, Michigan area though !

Present water flows on the Muskegon river are in the 3,000 cfs range, with water temperature in the 54-55 degree range.