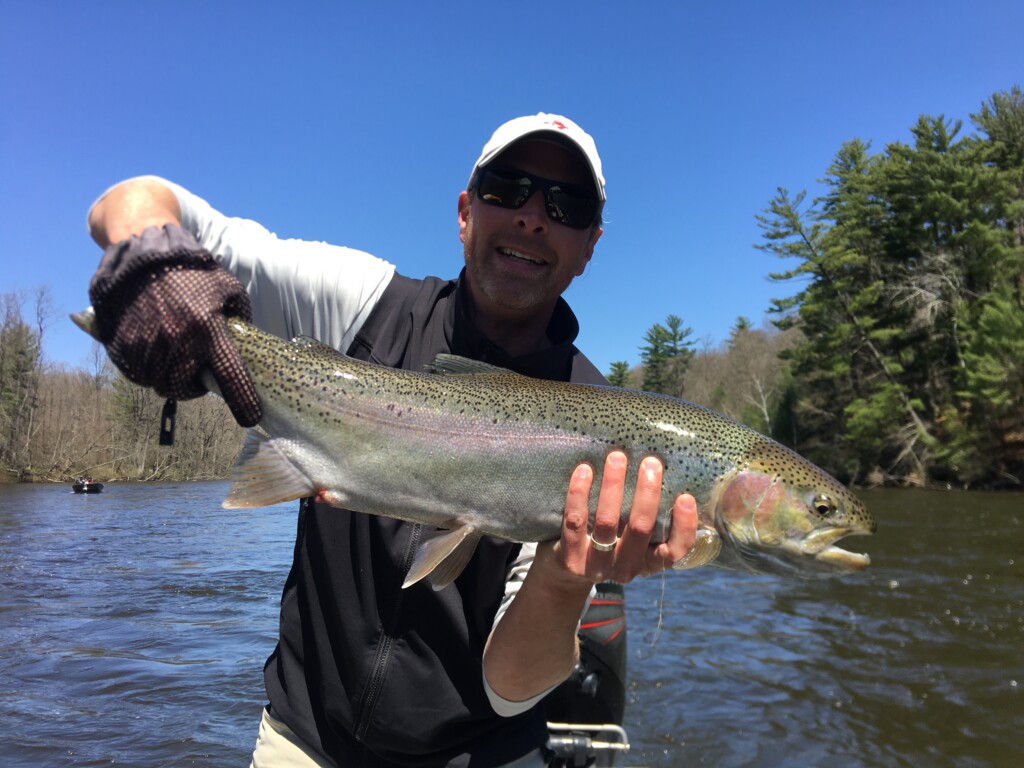 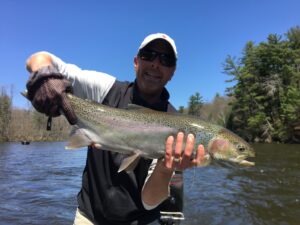 Realtor Extraordinaire Chad S. from Greenridge, with a great steelhead from the other days outing with friend and Mortgage Lender Extraordinaire Steve A from Mercantile Bank

The Muskegon river fishing report for May 10, 2020 in the Newaygo, Michigan area is about FINALLY being able to get back on the river and provide guided fishing trips.  After way too many weeks of being shut down by the Executive Order from Governor Whitmer, we can now get back to “work”.  This would have been great if it was even a week or so earlier, as we’re now at the end of our spring steelhead run on the Muskegon river.  However….there are still some steelhead around and I will be in pursuit of them in the days ahead.  With some cooler weather sticking around for a few days, this could help our cause.  Click HERE for current and forecasted weather for the Newaygo, Michigan area.

Overall, this years spring run has been less than stellar and regardless of what “some” may say, I think we’re ALL feeling the affects of the “fill a cooler, pack that stringer” meat heads who have over harvested steelhead for many years now.  Some of these people have NO concept of what “resource management” is, let alone conservation.  So…….HERE YOU ARE…..

Some of these “people” have tried to tell me several other things that THEY think account for the low steelhead population right now, but instead they should look in the mirror, do the math and come to the conclusion that you can’t take 2500-3000 adult fish out of the river population from mid fall – mid spring each year and expect the overall population to keep up with those harvesting levels……..enough on that, I think that I made my point. 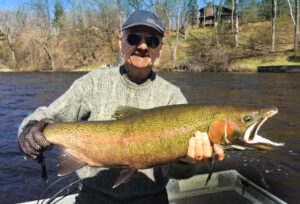 George with a great looking Muskegon river spring steelhead from a couple days ago.

Now that I am back to chasing the last of our spring steelhead for the 2020 season, I can say that it was nice not seeing a whole bunch of boats or anglers out the last few days, which will give this last batch of steelhead in from lake Michigan, a chance to successfully spawn this spring.   How long we have steelhead in will be directly related to river conditions, with water temperatures playing the biggest role.  Click HERE for current Muskegon river water flow data.

Soon we’re onto fishing for resident Brown and Rainbow trout, with arguably the best dry fly fishing of the year coming the end of May and going strong for anywhere between 3-5 weeks, depending on river conditions and related insect hatch “schedule”.  With 4-6 weight fly rods and tapered floating lines, I’ll be putting 9-10′ long leaders on that taper down to 4-5# test line, to cast a variety of dry flies with.  From early Cinnamon Caddis, to Gray Drakes that follow and Sulphurs in between, we’ll see a variety of insect emerge at differing times of the day and over the course of several weeks.

Shortly after the conclusion of our prime dry fly fishing, which is around late June/early July, we’ll be getting into the next season of summer time fishing, which is for smallmouth bass, northern pike and walleye.  Smallmouth will be the primary target species, but quite common to run into pike and walleye, pending what section of the Muskegon river we’re on or what river in general, as I will guide on several other rivers throughout the summer.

Once the dog days of summer are here, many anglers thoughts will shift to our next season of big game fish, which starts the end of August on the lower stretches of the Pere Marquette river near the port town of Ludington.

I know many people were/are going a bit stir crazy during this lockdown due to Covid-19, hopefully with some of the restrictions loosened or lifted, you can get out for some “hydro-therapy”.  If you’re interested in getting out with me, touch base and I’ll give you a current report on conditions and list of open dates to consider.  If you’re going to get out on your own for some wade fishing in one of our many great rivers in west Michigan, feel free to touch base with any questions – 616-560-3195.