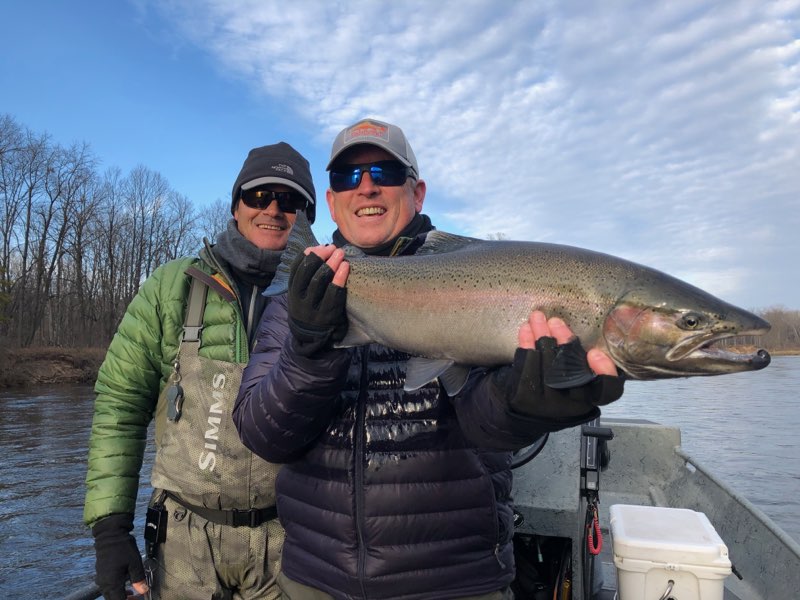 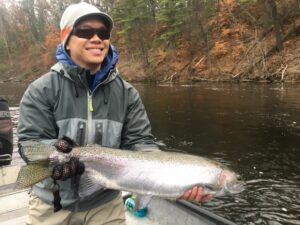 Kevin, from NC with a chrome one from our recent outing !

Welcome to December !  Although most of Michigan DOES have a “wintery” feel this morning due to some large and soft falling snowflakes that blanketed much of the state, it’s a mild morning and pleasant entry into the last month of 2019 !  Crazy year of weather for sure, with some recording setting “conditions”, be it rain fall, snow fall, overall precipitation, hail storms, high winds and tornadoes !!!!!

Fishing in general was “off schedule” for many species, both cold and warm water, in much of 2019.

On the fly fishing front, A LONG and wet spring and onset of early summer, found many rivers insect “hatch schedules” and mother nature in general, off course.     From massive flights of Gray Drakes on the Muskegon river, both in evening and at dusk, but also on many mornings, where some of the better dry fly fishing was found, to a very late and short sucker spawning season, to very extended emergence of mid summer mayflies, erratic is the best term.

Our friends to the north on the Pere Marquette river found their fabled “Hex” hatch, taking place in very high water, with early spring like apparel needed, due to some chilly nights that came on quick at times.   Some nights were short lived for rising fish, but overall they saw some really nice Brown trout come to net last summer.

Even on flat water – lakes – bass were late to spawn, bluegill were REAL late in spawning and many lakes stayed quite cool well into summer.

My shift from trout dry fly fishing  to smallmouth bass this past summer occurred around mid June, but only because most of our hatches were all but wrapped up.  That being said, this past summer was one of the few I remember, where we had trout continue to move for our flies and lures, through the whole summer.  Whether it was a baitfish, crayfish or attractor type of streamer, water temperatures didn’t get too high and trout were active right up to the end of the “dog days of summer”…..second week of August.

Shortly after that, I was up chasing early run Chinook salmon on the Pere Marquette with conventional tackle and although we found fish early, didn’t find a lot of them often.  Cooler than normal August weather found the river running MUCH colder than normal, for that time of late summer.  Late August and early September river temperatures were in the mid to upper 50’s, which is at least 5 degrees warmer than normal over recent years.  As most know, the Pere Marquette had a very good salmon run, which produced some very big fish !  I finished up my early season work up north with my typical dozen or so Manistee river trips, before coming down to the Muskegon the second  week of October.    After a handful+ of Chinook salmon trips, we shifted to fall steelhead……but “good” fishing the end of October and early November, was short lived.  With a hodge-podge of thoughts and/or theories on why we didn’t get a larger push of fall steelhead during prime time, with good river conditions, nobody can seem to put it all together in a sensible manner.  Yes, lake Michigan did stay warmer than many rivers, much longer this year, however that can only go so far in explaining the drop in numbers.

One can always put the topic of “harvesting” near the top of the conversation, when talking about Muskegon river steelhead population and fishing.  Call it what it is, we have seen a bigger wave of “guides” who simply kill more fish, on a regular basis than in previous years and this will impact the fishery.  Last fall – 2018 – we had a poor fall run and it found many “newer” guides, killing the smaller steelhead that we call “skippers”, which were in the 18-22″ range last spring .  Those steelhead could have been in our 6-8# class of steelhead,  for the fall of 2019…..but many weren’t, because they’re dead. Enough on that, onto a current report. 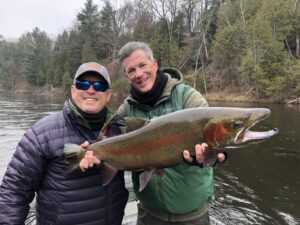 Byron holds a great “buck” steelhead, while Andrew helps him take it all in !!!!!

The Muskegon river steelhead and trout fishing has been fair in general, over the last week+.  With higher than average water for the whole fall and early winter season, it has been some comfy living for resident Brown and Rainbow trout, as well as the steelhead that did come into the river.  With so much water, there are different slots, sections and runs of the river to hold in, that were not nearly as appealing compared to normal water levels.  Our 2 month “average” is around the 2,000 cfs range, but this past fall it has probably averaged closer to 3,000 cfs, if not a little more.  Click HERE for current Muskegon river water flow data from Croton dam. 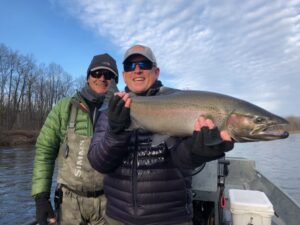 Andrew with a great fish of his own…..I’m just there for emotional support !!

All this said, there have been some nice fish caught, but we’re simply having to work harder to find the biters and NOT lose them when we do get them hooked !

Using both fly fishing and conventional equipment, we’re fishing a lot of different water,  as river temperatures haven’t dropped too low, to the point of driving all fish into winter water.  Much of this has been in or around the Newaygo, Michigan area, but venturing down stream from there a few miles on any given day.

With some chaotic weather over much of November, things returned to near normal this past week or so and both short and long range forecast doesn’t show anything too alarming in our upcoming weather.  Click HERE for current and forecasted with for the Newaygo, Michigan area.

Present water flow in the 4,500 cfs range, with temperatures hovering around 39 degrees.