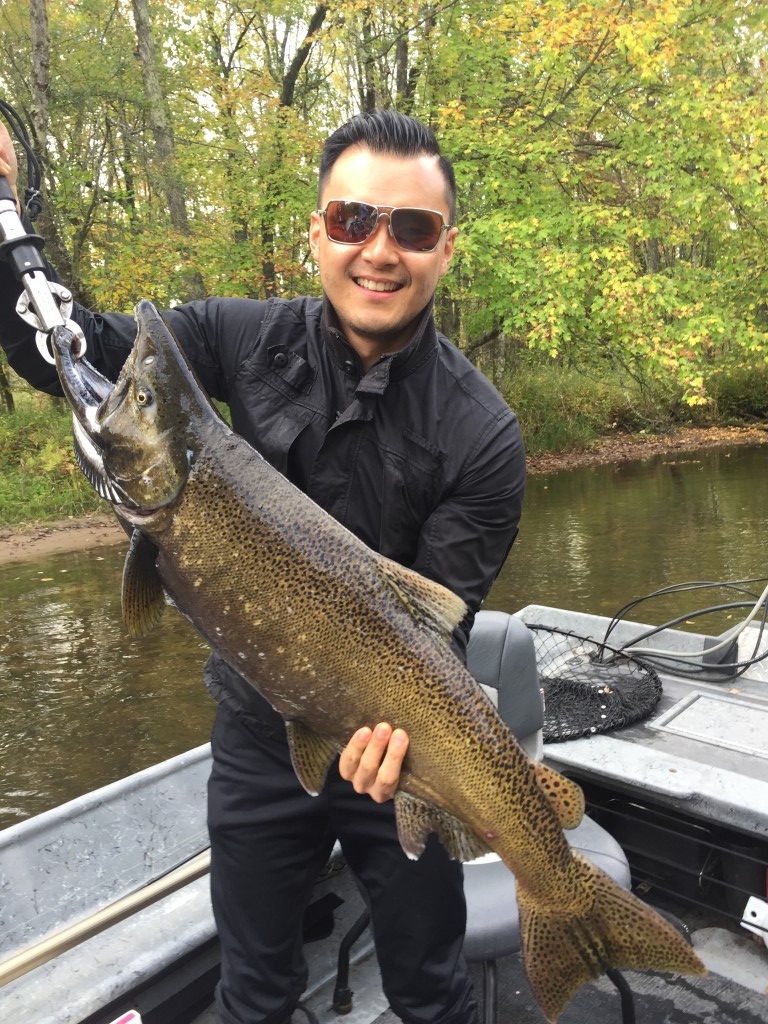 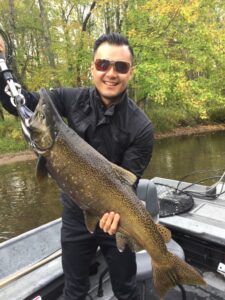 The Muskegon river fishing report for September 21, 2017 in the Newaygo, MI area is about the return of summer like conditions in west Michigan !

With day time temperatures tickling the 90 degree mark, we’re in some of the warmest weather we’ve had all summer here in Michigan and throughout the Midwest.

Come this time of September the talk is historically about the onset of our annual Chinook salmon run….but this will have to wait.  Water levels are at a very “skinny” 1000 cfs, a bit below normal and water temperatures headed back up with the warm last week+ and is just under 70 degrees.

This has and will affect the salmon migration, but luckily we have several rivers that have such migratory runs that start at different times.  Historically, of the 3 most popular, the Pere Marquette starts first, followed by the Manistee and then the Muskegon river. 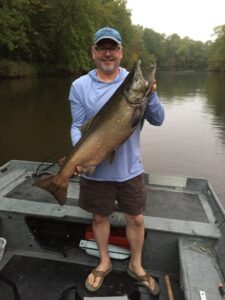 Stephen, also from west MI, fished with Steph and is pictured here with one of his salmon from the day.

Other rivers in NW lower Michigan that are into their annual salmon run, such as the Pere Marquette and Manistee rivers, are also feeling the heat.   The arrival of more salmon out of lake Michigan and into the rivers has been a trickle affect, with lake Michigan water temperatures also near 70 at the shoreline, up and down the coast.  We’ll see more show up, but how many on the Pere Marquette is a big question mark, the Manistee will see more come in once conditions improve and with the Muskegon being the last, we’ll see more of them in October.

Not far behind all these salmon will be the arrival of fall steelhead, which we fish on the Muskegon river from late October – the New Year and even further into January when weather allows…..but with the way things are “starting”, we could very well  have quite good fishing in January this year !

I’m still chasing salmon in the lower Pere Marquette river, with differing results each day…but there are certainly fish around.

Present water temperature on the Pere Marquette in the low 60’s and the Muskegon is running around 69-70 degrees.