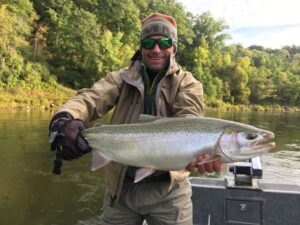 The Muskegon river fishing report for October 29, 2019 in the Newaygo, Michigan area is about the last of our fall fun salmon, onset of the fall and early winter steelhead season and the recent rise of river levels.

The fall Chinook salmon run looks for have been a pretty good one overall, however it didn’t mirror what was seen on the Pere Marquette or Manistee rivers earlier in the season.  That being said, it’s NOT over, we just had another good batch of salmon show up in the last 24 hours.

The fall steelhead season started pretty good a week+ ago, with those fish being found right behind spawning salmon, however the drop in river levels put a “pause” on the fall run, which should kick back into gear with the higher water we saw arrive late Sunday/early Monday.  Click HERE for current Muskegon river water flow data.

With the pending arrival of colder weather and more precipitation, we may see rivers levels come up a bit more, before dropping down for the rest of the season.  Click HERE for current and forecasted weather for the Newaygo, Michigan area.

With the use of both fly fishing and light spin tackle equipment, the focus for November, December and up to early January, will be steelhead that I will pursue over a 30+ mile stretch of the Muskegon river, from Croton dam down river to the town of Muskegon itself.   Much of where I decide to put our time in, will depend of river levels, temperatures and clarity over the next couple months+.

Present water temperature in the 52 degree range and flows are around 4,500 CFS as of this morning.