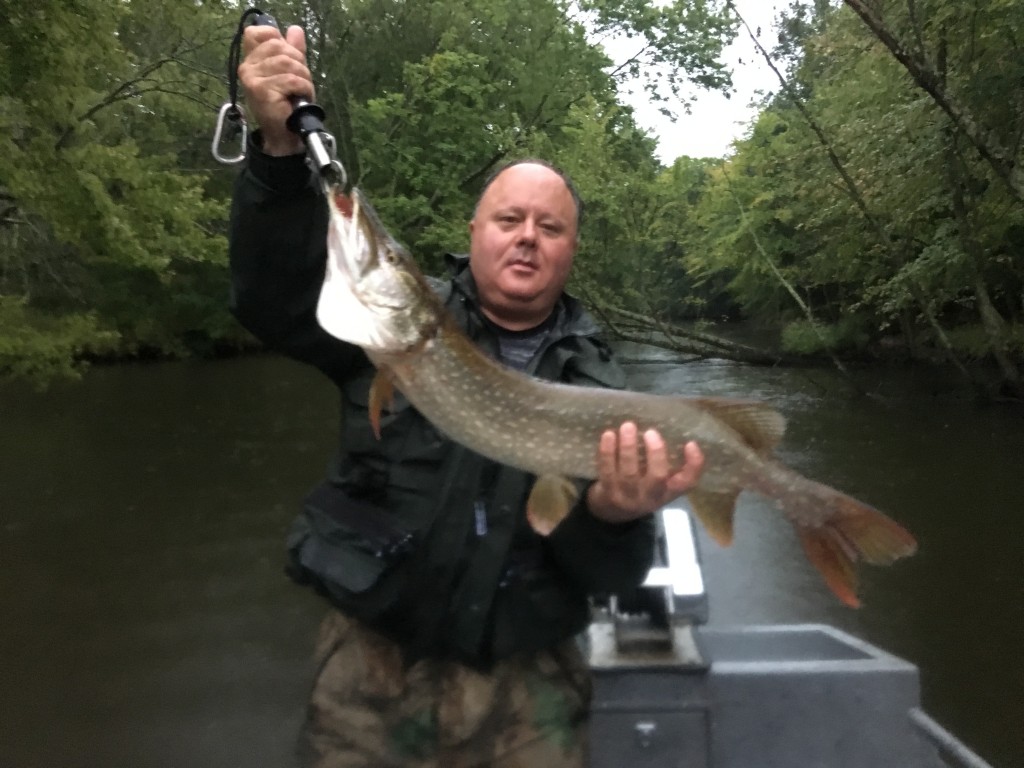 The Muskegon river fishing report for the Newaygo, MI area is shifting from thoughts of late summer Smallmouth bass, to early fall Rainbow and Brown trout, as well as incoming migratory Chinook salmon on their annual spawning run AND fall Steelhead right behind them !!  BIG FISH ARE NEAR !! 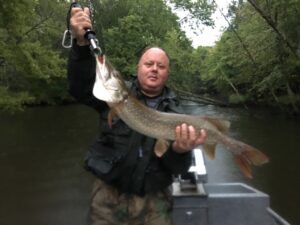 Jeff with a longer & heavier than normal Northern Pike caught while fishing for salmon on the Pere Marquette river with friend Steve, both from mid Michigan.

Actually, some salmon have entered the river system and have been providing limited fishing for them in the lower river, close to the port town of Muskegon.

As water temperatures drop, more salmon will be staging in Muskegon lake and making their way into the river.  We’ll see salmon show up in the Newaygo area soon, as they stage in deeper pools and runs until their biological clock tells them to get up near spawning grounds.

Steve holds a nice Pere Marquette river Chinook salmon from out outing the other day.

With both fly fishing and conventional gear, I will start fishing the Muskegon for salmon and early fall steelhead, in another couple weeks.  In the meantime, I’m still fishing the Pere Marquette river for salmon and will be doing my customary handful of trips on the Manistee river end of September/early October.

Although we don’t have nearly the number of salmon that we’ve seen in years past, there are some BIG ones !!  I’ve put over 15 salmon in the net that weighed 20 pounds or more so far this fall.

Water temperature has finally dropped below the 70 degree mark and with cooler nights ahead, we should see that continue to come down.

Present water temperature around 68 degrees in the Newaygo area.