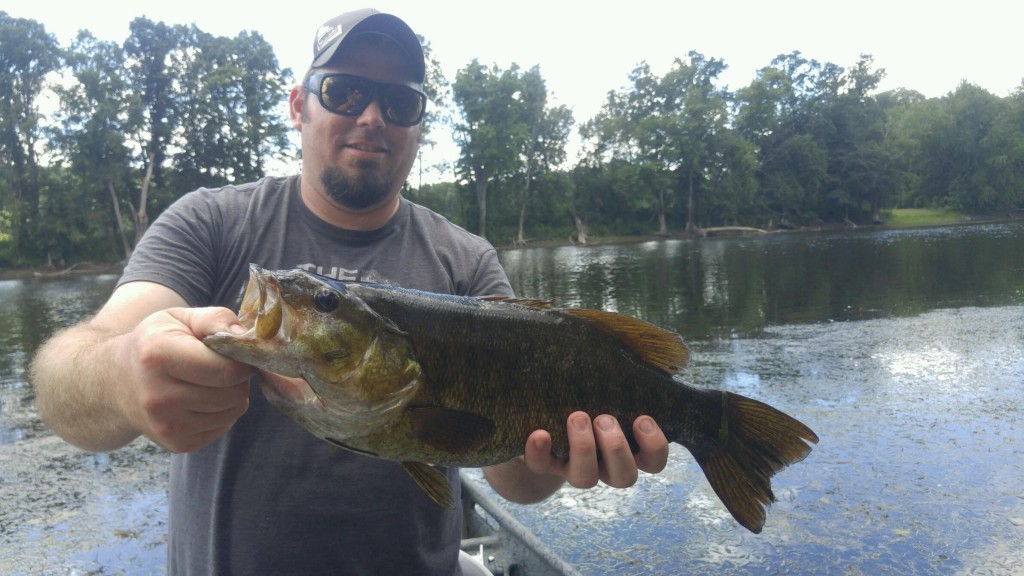 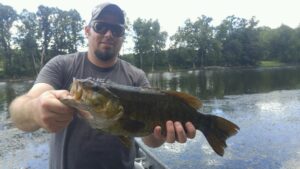 Tim holds the winning fish for “largest” Smallmouth from the B1F, held last Saturday on the Grand River. This Smallmouth bass 1 fly invitational tournament was a blast, with 27 anglers, in 9 different boats, fishing 3 different stretches of the Grand River in Grand Rapids.

The Muskegon river fishing report for the Newaygo area is all about summer and Smallmouth bass !  Great fighting fish for their size and arguably only second behind the Steelhead for the battle they put up, for the size they are.

With both fly fishing and light spin tackle equipment, we’re getting fish on both topwater poppers & waking lures/flies, as well as subsurface with imitations of baitfish, crayfish and some general attractor patterns.

With water levels at their LOWEST levels of the summer, presently 967 CFS, with normal in the 1150-1200 range, fish will be bunched up in optimal “lies”, but likely very spooky due to low and clear water.

With rains in the forecast for the rest of today and tomorrow, we’re hoping for a good soaker to bring water up a bit.

I’ve found some discrepancy in the water temperature readings coming from the USGS site, compared to what I’m getting while actually on the water.  I see a pretty consistent rise and fall of temps each day on the USGS site, but have found it different when I’ve taken water temps each time out over the past week+.  One example would be this past Monday night – Tuesday morning.  I was doing an evening trips on Monday and we had water temps of 73 by Newaygo and in that same water the next morning, I got 69 degrees….that does not show up on the USGS site, so just be aware that what you may see online, may not be pinpoint accurate.