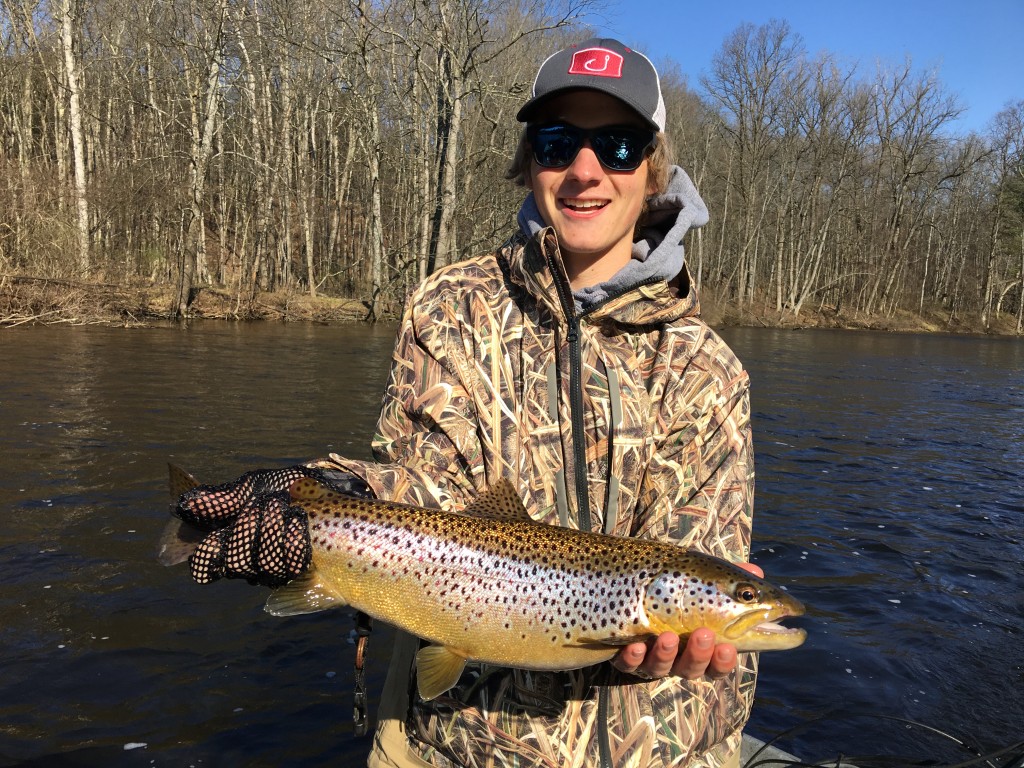 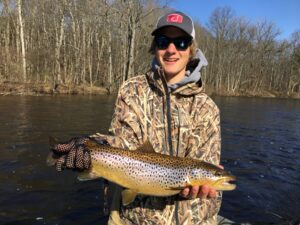 The Losey’s take on the Muskegon river….and do WELL !!!  John brought Squirt and both caught some nice fish.
Squirt holds a dandy Brown trout.

The Muskegon river fishing report for the Newaygo, MI area is about our spring steelhead run, the onset of some very good fishing for resident Rainbow and Brown trout around spawning steelhead and even some trout rising to dry flies !

We are in the heart of the spring steelhead run and will be fishing them through mid to late May, depending on weather and river conditions.  Using both fly fishing and light spin tackle gear, we’re able to target pre-spawn and “dropback” steelhead, with some of those coming right amongst actively spawning fish.  Recent days have found some dropbacks very close to bedding areas, however it’s best in the “big picture” and the overall health of the steelhead fishery, to let the females get their job done. 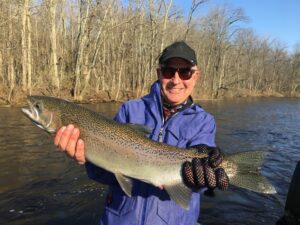 John with his first steelhead !

Some nice trout are posting up close to spawning fish and fishing lighter tippet will get more fish looking at your egg and nymph imitations.  We have seen a few trout rising to black stone flies in the afternoon, but conditions aren’t optimal for that quite yet as water temperatures are still a bit chilly for trout to spend time up near the surface, keying in on dry flies.  Should this hatch stick around for another week+ and we see a rise in water temperatures, we could see more rising trout.

The river has been busy, with week days being just as busy as some weekend days, but I guess that’s going to happen with you have in excess of a million people within an hour of the Newaygo area.   I would personally like to see fewer fish harvested, as many fish are going out on stringers, but a more conservation minded effort amongst the masses is going to be necessary for this to occur. 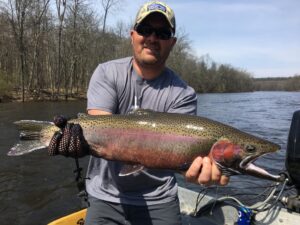 Tim with a very colorful male steelhead….had shades of near purple…..VERY cool colors. 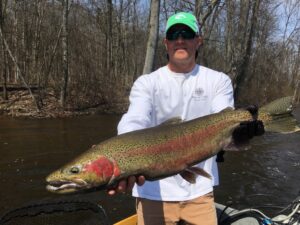 Scott with a stud male steelhead that put up a great battle while fishing with friend Tim.

With fairly stable weather forecasted over the next few days, coupled with a  bit of rain that may make it through west MI this week, we hope to see river levels hold and water temperatures not rise too quickly.