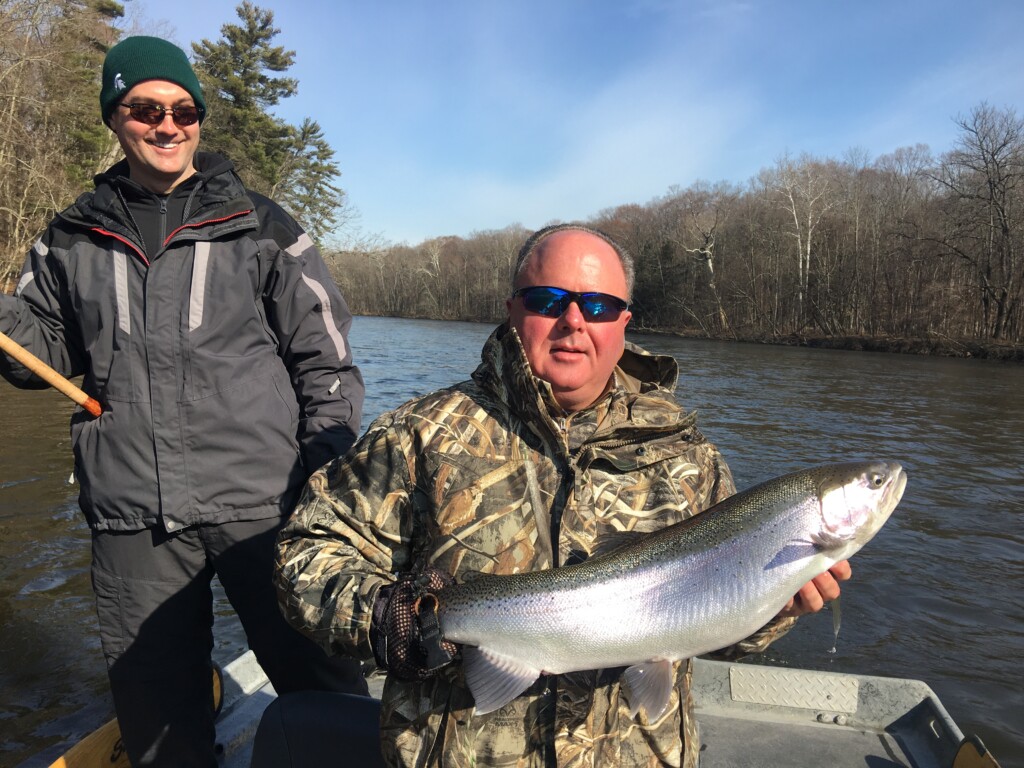 Jeff with a nice, chrome Muskegon river steelhead from yesterdays outing with friend Steve, who provides “photo-support” for Jeff……Steve got one of his own as well !

The Muskegon river fishing report for March 28, 2019 in the Newaygo, Michigan area is about the continued high water and onset of the spring steelhead season.

Following heavy rains, snow melt and related runoff a week+ ago, the river come up quite a bit, but has since begun to drop in levels and come up a bit in temperature.  Click HERE for current Muskegon river water flow data.

With warmer weather having arrived the last couple days, we should see river temperatures continue to rise and this will prompt more steelhead to come in from lake Michigan on their annual spawning run.  Click HERE for current and forecasted weather for the west Michigan area.

The cold nights of the past near week had been keeping water temperatures quite cold for late March, but this is due to change as we get into more spring like weather here in west Michigan.

With both fly fishing and light spin tackle equipment, we’ll be pursing not only migratory steelhead, but also resident Brown and Rainbow trout that are surely eager to strap on the “feed-bag” and be eager to start gulping down easy meals of steelhead eggs and insects that get kicked up during the steelhead spawning process.

Since the spring season has taken some time in getting here, we will likely see the Muskegon river spring steelhead run go well into the month of May.

Shortly after the steelhead wrap things up, resident and migratory suckers will be next to spawn and trout will be found behind them, continuing to feed on eggs and insects.

Come late May, insect hatches will pick up and mark the beginning of the best dry fly fishing for trout that we’ll have on the Muskegon river up until late June, possibly early July depending on how quickly the river warms up, which often dictates much of the insect hatch “schedule”.

Present flows are just under 5,000 cfs, with the norm being closer to 3,000, but this will be changing in the days and weeks ahead.

Present water temperature is in the 35-36 degree range.