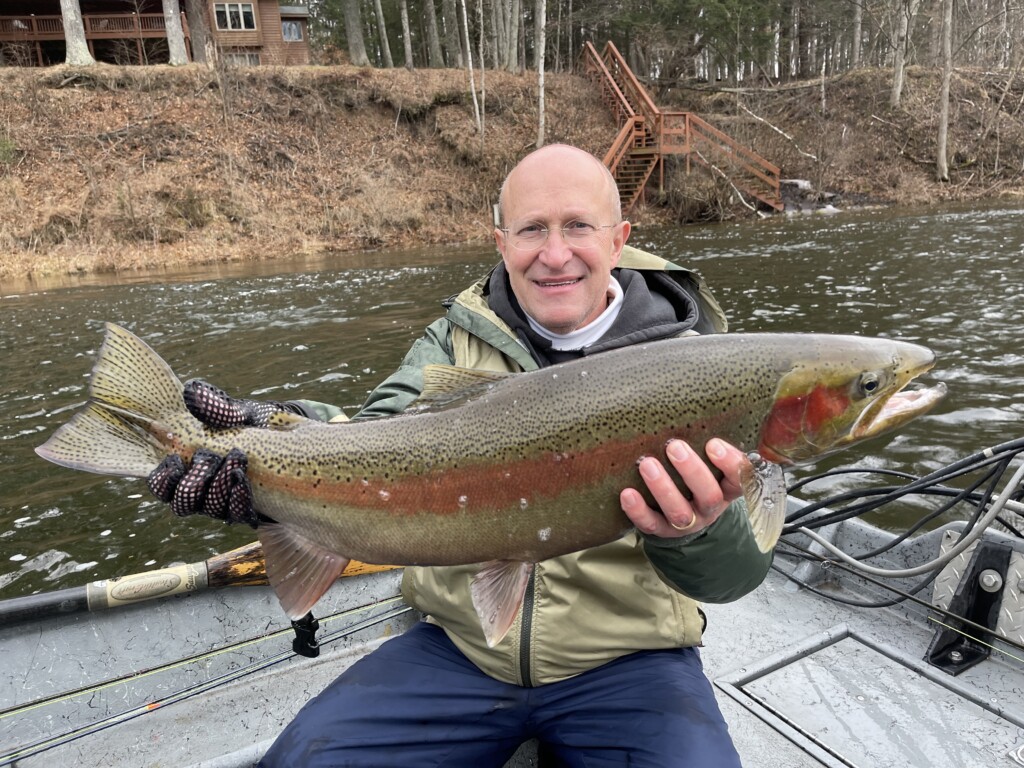 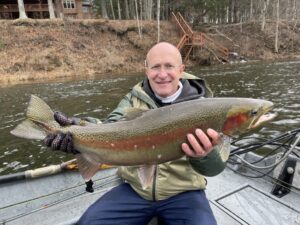 The Muskegon river fishing report for March 20, 2022 in the Newaygo, Michigan area is about the arrival of “spring” and the spring steelhead run going on now.

Each year, all adult steelhead will migrate up their natal river at some point during spring or early summer to spawn and this is now in progress on several Michigan rivers.

For those steelhead who came into rivers last fall and “wintered over” in a river, they will either be in the process of spawning now or have already done so at this point in late March.  Several factors trigger steelhead to migrate up river each spring, with their biological clock being a major one, along with river levels and river temperatures right behind.

With both fly fishing and conventional equipment, we’ll be fishing for not only the migratory steelhead, but also the resident Brown and Rainbow trout who will be getting more active as river temperatures come up.

The spring “season” for steelhead on the Muskegon river typically runs from mid to late March – early to mid May.  Some years the run will go longer, even close to June, but this all depends on river conditions and weather.  Click HERE for current Muskegon river water flow data.

With some rather odd weather patterns having come through much of the Midwest over the last near month, we find very little snow around.  As a result, won’t have much runoff at all to help keep river levels up after the snow and ice finish melting from the woods around the river basin and the reservoirs up stream from the Croton hydroelectric dam.  Click HERE for current and forecasted weather for the Newaygo, Michigan area.

Not long after the steelhead wrap up their annual spawn, we’ll be into the heart of dry fly fishing for resident Brown and Rainbow trout from latter May – late June, maybe longer if we can keep good levels and river temps.    Shortly after the bulk of our Muskegon river insect hatches take place and the best dry fly fishing of the year has come and gone, I will jump right into Smallmouth Bass and Northern Pike fishing on the Muskegon river from Rogers dam up in the Stanwood area, down to Bridgeton or lower.    I will also be guiding on the Grand river from around the central Grand Rapids area, east towards Ionia.  Which rivers fish good this summer for them will depend on not only river levels, but also temperature, visibility and weed growth.

I’m down to my last couple of open dates for spring steelhead fishing up to May 10 and have about 10 open dates for prime dry fly fishing from later in May – onset of July, so if you’re considering getting out on a guided trip in the next 3’ish months, touch base to check availability.

Lastly, I’ve been asked a couple times during recent phone conversations from new inquiries about keeping spring steelhead.  I’m reminding all that due to the fragile status of our great lakes steelhead fishery in general, I am practicing catch and release fishing for all spring steelhead, as well as resident trout.   Some guests have kept fall caught salmon in the past, which I’m still fine with on a selective basis.  We all need a reminder from time to time that our rivers are “resources” that need to be managed by not only our state/DNR who set and enforce regulations, but also us as anglers who want to catch some fish not only now, but in the years ahead.  We’re facing trying times with our great lakes in general, the arrival of more and invasive species, high predation levels amongst steelhead and salmon smolt, along with never seen before major swings in weather patterns, all of which add up and we need to do our part as anglers to help the overall cause.

Should anyone have questions about current conditions on other rivers or technique, rigging, etc., feel free to touch base by email, call or text – 616-560-3195.