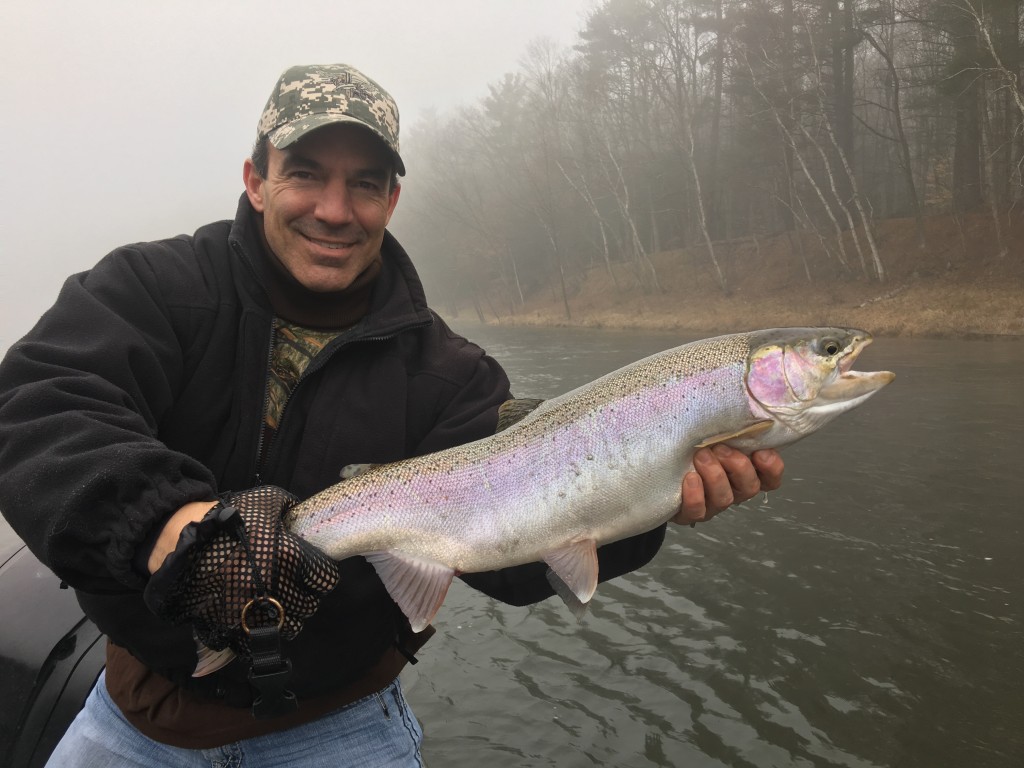 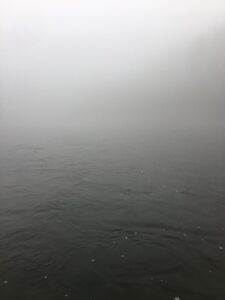 This is the Muskegon river at 9:30 am yesterday. Visibility of a bobber/indicator was about 50 feet. Very cool morning to be on the river.

The Muskegon river fishing report for late February is about the atypical weather we’ve had in the Midwest the past week+ and many are wondering what this will do to the onset of our spring steelhead run.

Is this February or April ????….kind of feels like April  and the river is starting to show signs of a quick transition from “winter” to mid spring REAL fast if we don’t get some colder weather in the middle and upper stretches of the Muskegon river. 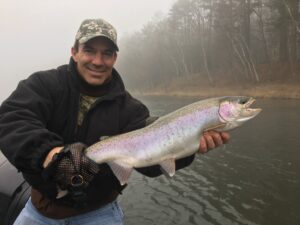 Jim with a nice February steelhead from yesterday morning.

With ice quickly melting on Rogers, Hardy and Croton reservoirs, we could see a continued rising of water levels, but it will stay cold until the ice is gone….but once it’s gone, the river will warm quickly.  We still have some snow in the woods in the upper reaches of the river, around the Grayling area, but this too will melt quickly if we keep these warm temps.

We are fishing for both resident Rainbow and Brown trout, as well as migratory steelhead that have either “wintered over” in the river or recently showed up as a result of the rise in water levels.  With both fly fishing and light spin tackle setups, we’re able to get our “offerings” to fish in typical winter “lies”.

As we put a wrap on February and welcome the month of March, many anglers thoughts will shift to spring and early summer fishing opportunities.  Our spring steelhead run on the Muskegon river is in it’s very early stages now, as we ARE seeing some more fish come in from lake Michigan.  How many have/will come up with this new water has yet to be determined, but new ones are here for sure.  As water temperatures rise, trout will be much more active and getting them to chase streamers will be more likely than right now.

My availability for guided trips is very limited this spring, as I only have a handful of open dates from next week – mid May.  Similar with the prime trout dates of late May – late June, I’m about half full at this time.  If you’re even pondering a guided trip, please touch base sooner than later to talk availability and other details.

The next week-10 days weather looks like more unseasonably warm conditions, with highs in the upper 30’s and low 40’s and low around the freezing mark.