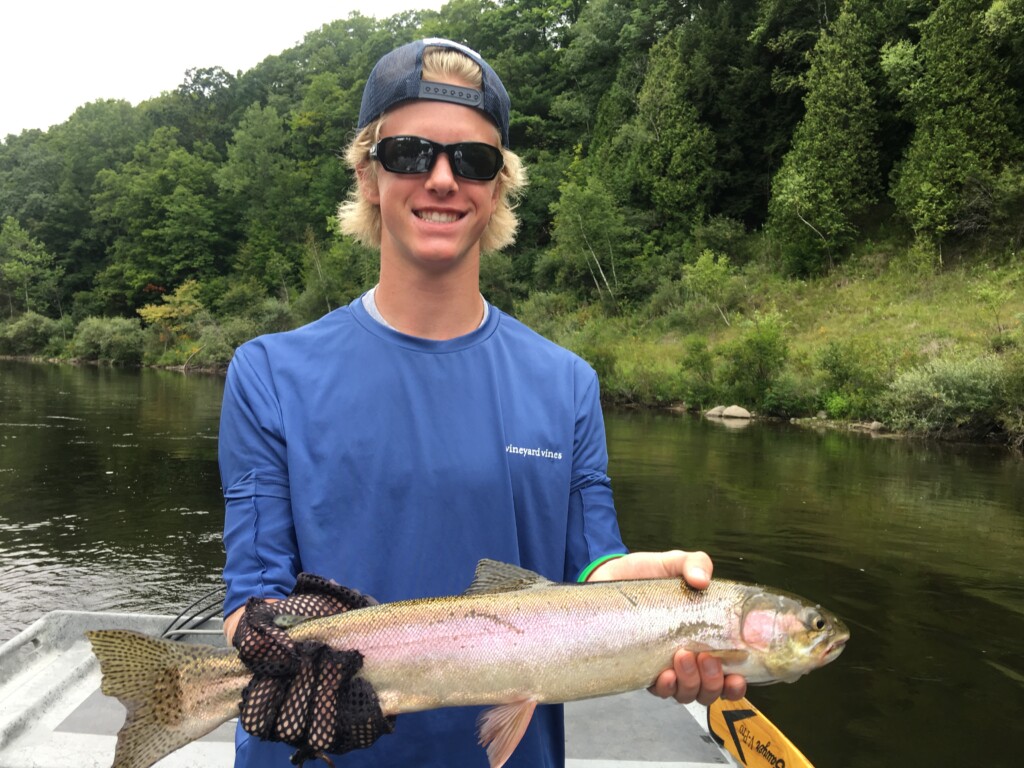 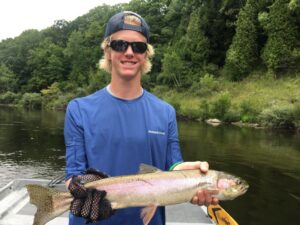 Ryan, from Grand Rapids, with a surprise fish from yesterdays outing with dad Terry and brother Tyler….a Skamania steelhead !

The Muskegon river fishing report for August 21, 2019 in the Newaygo, Michigan area is centered on the continued late summer pursuit of what is typically warmwater  species of fish such as Smallmouth Bass, Walleye and some Northern Pike….but not just those fish this summer !  Due to the wet and cool onset of the summer season in late May/early June and some pretty consistent rains over the course of the last couple months, the Muskegon river has stayed cooler than normal and we’ve had trout being more active than usual.   With water temperatures getting up to 70 degrees only a few times over the last month, all fish are more actively feeding than we usually see during the “dog days of summer”.  Click HERE for current Muskegon river water flow data below Croton dam.

With both fly fishing and light spin tackle equipment, we’re fishing a combination of topwater poppers and waking flies/lures, as well as subsurface imitations of baitfish, crayfish and general attractor patterns.  It can be a true buffet of different fish any given day, with trout, rock bass, smallmouth bass, walleye and even a few northern pike being hooked here and there. 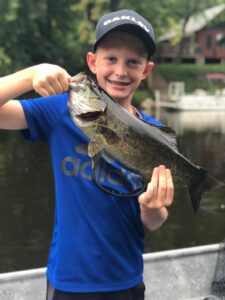 Tyler with a GREAT Muskegon river smallmouth bass that gave him quite a battle yesterday, nicely done!

As the days get shorter and nights get colder, we’ll be seeing signs of the fall season come upon us quickly over the next few weeks and it won’t be long before Chinook salmon make their way up the Muskegon river on their annual spawning run.  With a pretty tame forecast over the next week-10 days, we’ll likely see Muskegon river water temperatures slowly start to drop and we should see the first signs of early run salmon, in another few weeks.  Click HERE for current and forecasted weather for the Newaygo, Michigan area.

On the topic of migratory salmon, I will begin my Pere Marquette river salmon trips this week and be chasing fish around up there through the end of August, September and into the first week or so of October.  If there is any interest in getting into some of these big lake BEASTS, it will be best to contact me sooner than later to check on availability, as I’m quickly running out of open dates.  Speaking of big fish, there are some true giants swimming around lake Michigan this summer, with many fish over 30# being caught, so we’ll see some big ones in the river this fall !

Present water flows on the Muskegon river are running around 1200 cfs, which is about average for this time of August.