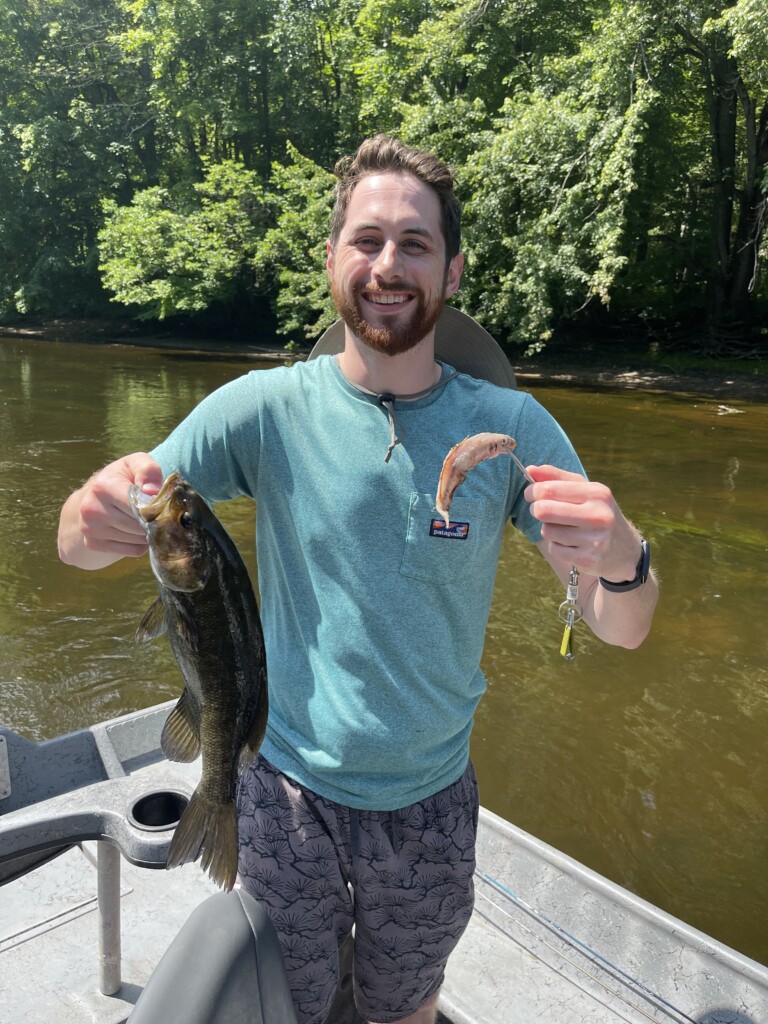 Summer fishing on the Muskegon river in the Newaygo, Michigan area north of Grand Rapids, continues to fish well for Smallmouth Bass, as well as the occasional Walleye and Northern Pike.   The resident Brown and Rainbow trout are still out and about, but fishing for and catching them can be fatal at current river temperatures.

With both fly fishing and light spin tackle, we’re fishing both topwater and subsurface flies and lures in likely holding spots for fish.  Fly gear setups include 6 or 7 weight rods, with bass taper fly lines and when fishing streamers, light sink tips to get flies down 2-4′.  Spin tackle rigs consist of 6-7′ long rod, in medium light action, with 8# tied to the lure.  Topwater action has been up and down the last couple weeks, but when the fish are enticed to “look up”, the takes, battles and jumps have been a lot of fun !

We’re not far off from seeing viable numbers of early run Chinook salmon get into some smaller rivers in west Michigan.  Reports from the Little Manistee  have some fish up there already, which is quite common each year come late July/early August, but not a lot of them.

For those looking to get out on their own for a few hours of walk in-wade fishing, certainly feel free to touch base with any questions about equipment, fly or lure choices, walk in spots and rigging – 616-560-3195.

For others who may be kicking around the idea of a guided trip this fall for either September/October salmon or November/December steelhead, it would be best to touch base sooner than later…..I’m out of dates for September, close to it for October and similar for November and the early part of December.